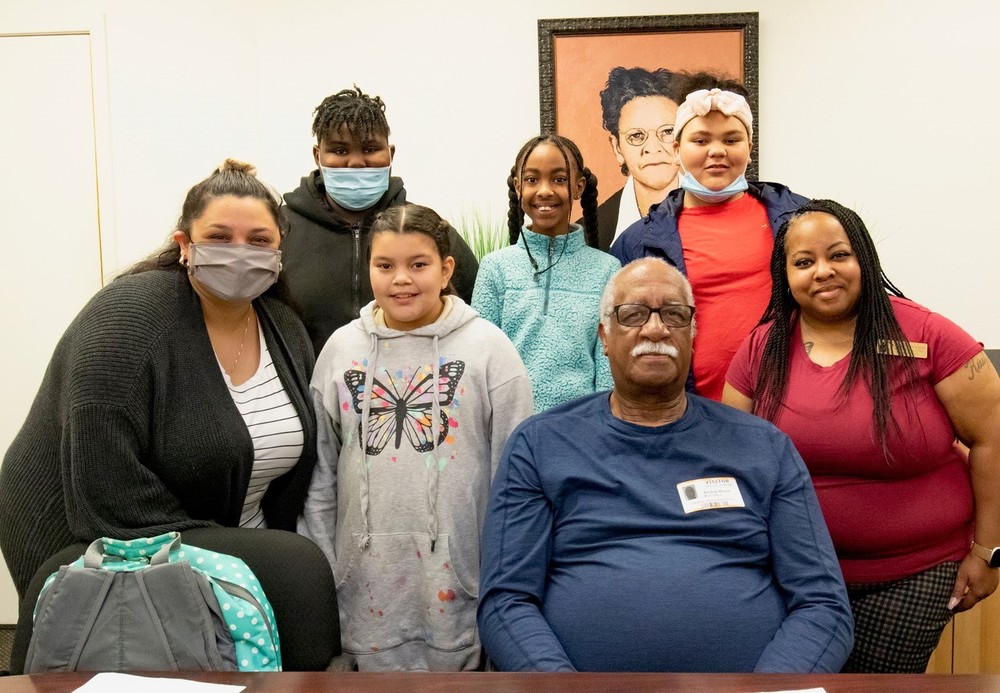 Archie Rison was a first-grader in September 1954 when Emeline Carpenter’s name was affixed to a Nacogdoches elementary school then located along Shawnee Street. Rison, a Nacogdoches native who now lives in North Texas, remembers it to this day, and on Tuesday, he shared those recollections with fifth-grade students at the current Emeline Carpenter Elementary located on Leroy Street.

Kiesha Tutt, the social worker at Carpenter Elementary and an alumna of the school, wished to incorporate Carpenter’s name and service to Nacogdoches into a Black History Month project at the school.

“I thought ‘What should we do?’” Tutt said. “In a very short amount of time, we’re moving to a new campus.”

The new Emeline Carpenter Elementary School will open for students in August. It’s located on Southeast Stallings Drive across from McMichael Middle School.

“I got to thinking that Ms. Carpenter would be so proud,” Tutt said. “Then I thought, ‘How many of our students even know about Ms. Carpenter?’”

So Tutt reached out to Rison, whose razor-sharp memory was on full display to the four fifth-graders selected to interview him.

Rison said Carpenter taught 41 years before retiring. In 1954, when the E.J. Campbell High School on Shawnee Street opened for Black students in Nacogdoches, school leaders needed to rename the elementary campus that served the southeast area of the city.

Since Campbell’s name was already on the elementary school, the NISD board selected Carpenter as part of the renaming of the campus located across Shawnee Street from the then new high school (and later, NISD administration building). That took place Sept. 14, 1954, Rison said. He nailed down the date by poring over old copies of board minutes from that era.

In 1964, the current Carpenter school opened at its Leroy Street location at a time Nacogdoches schools were still segregated.

On Tuesday, Aaliyah Westcott, Tristen Walker, Kaeleigh Smith and Missan Mohamed got their chance to question Rison, including asking what he thought Carpenter’s feelings might be about not being able to attend school with white students or teach with white colleagues.

“She made sure she taught kids how to make the best of what you had,” Rison said. “And she took advantage of what she had in front of her.

“And it was all we had, so we had to take advantage of it, too.”

Born in 1884 in rural Nacogdoches County in the Post Oak Community, Carpenter died in 1967 at the age of 83. Carpenter began teaching in that rural community, Rison said, after attending Bishop College (then located in Marshall) and Prairie View College, now known as Prairie View A&M.

“You all are her legacy,” Tutt said, looking around the room at the fifth-graders who were there to interview Rison. “You and each and every student who’s gone through here.”