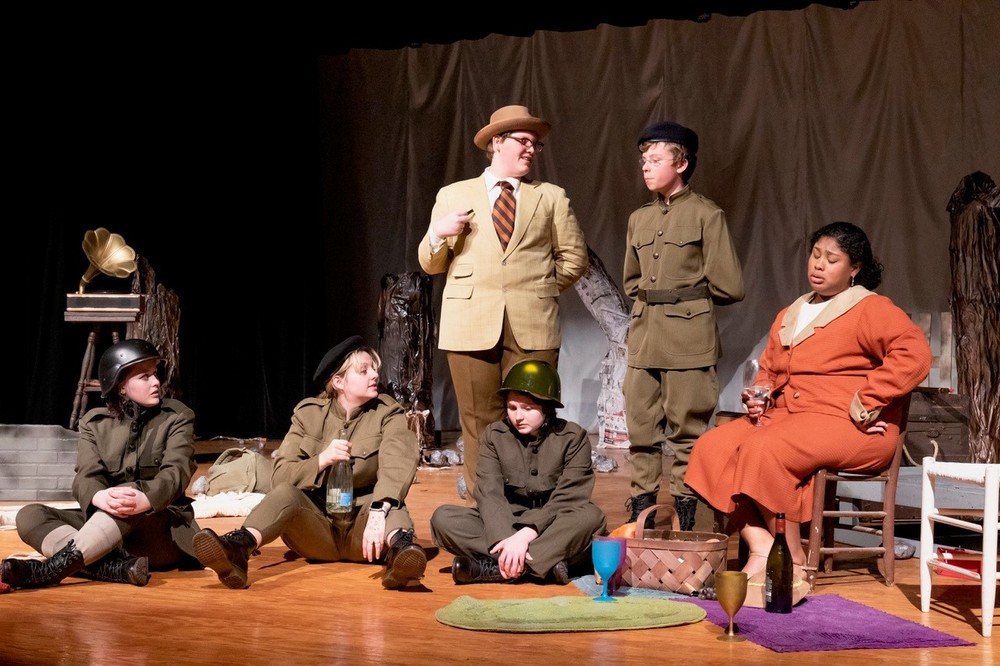 Nacogdoches High School Theatre Director Victoria Perry’s selection of Spanish playwright Fernando Arrabal’s “Picnic on the Battlefield” couldn’t be more timely for the One-Act Play this month. The topic – a war, featuring nameless adversaries on a nameless battlefield, is cast as the ultimate absurdity – is more relatable today than ever as social media and newscasts follow along in real-time as Russian troops and armored columns pierce even further into Ukraine.

Perry made the selection of Arrabal’s work back in November before current events began playing out in eastern Europe. Perry wants her students to experience a range of styles, in this case, the Theatre of Panic.

“I wanted the students to explore a style they had not tried before,” said Perry. “It's a mission of mine that when a student graduates from my program, all the productions they were a part of are unique.”

Earlier this month, the NHS team swept the acting awards at the district meet in Whitehouse and will move on to bi-district on March 24 with their production of "Picnic on the Battlefield." The NHS team performs two shows at the NHS Auditorium on Thursday and Friday, March 17-18. Admission is $5; the house opens at 6:30 p.m. and the curtain goes up at 7 p.m.

In “Picnic,” young soldier Zapo – portrayed by Mae Johnston – is visited on a live, yet remote, battlefield by his parents, Monsieur Tépan (Mars McIntosh) and Madame Tépan (Brianna Hightower).

Zapo is not the most enthusiastic of soldiers. He's patrolling an isolated area of the line and, in equal measure, finds orders difficult to understand while he battles long periods of tedium that are terrifyingly punctuated by fearsome artillery attacks.

McIntosh, who plays the role of the soldier's father, acknowledges the impact the material holds, especially when cast against the backdrop of today’s war in Europe. “Even though this is a play taking place in the past, it still has great relevance to today’s events.”

In “Picnic,” during the parental visit, Zapo’s father blithely boasts of his own exploits on earlier battlefields. And both parents treat the outing as little more than a social call in the countryside on a bucolic Sunday afternoon, adding a veneer of absurdity that’s slowly undermined by slow-building feelings of foreboding.

The son and parents decide on a picnic, but Zepo – played by Riley Hall – intrudes on the proceedings. Zepo is an enemy soldier who turns out to be just as bewildered by what the war means and is altogether as interested in survival as Zapo.

The remainder of the cast includes Jacob Norman and Mackenzie Taylor, two stretcher-bearers searching for that elusive wounded (or dead) soldier to carry back to headquarters, all part of a macabre contest to see which corpsmen can transport the most bodies.

“I chose this back in November, well before the events of Ukraine and Russia,” said Perry. “In a time of fear and uncertainty, these amazing students chose theatre and creativity.”

“The thing that we have done as a company that I am proudest of is that we are able to collaborate and create a lively experience,” said Hightower, who portrays the mother of Zapo.

“With everyone that's gone on in the world, it's been hard to focus,” said Johnston, who plays the role of Zapo. “But we zoned it and committed and we made awesome theatre.”