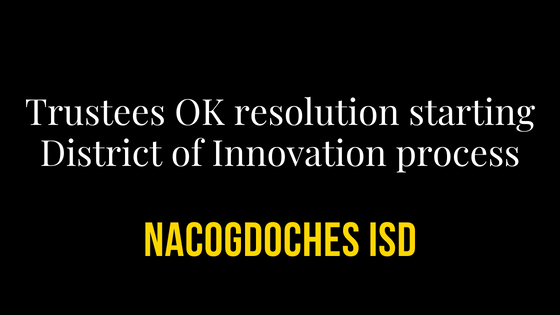 Nacogdoches ISD’s Board of Trustees unanimously adopted a resolution Thursday to initiate the process under Texas Education Code to become a District of Innovation (DOI).

Following the adoption of the resolution, the board held a public hearing for comments. Later in the meeting, the board authorized Superintendent Dr. Gabriel Trujillo to appoint the members of the district’s DOI Advisory Committee to develop a plan for moving forward.

Once formed, the committee will explore areas the district is interested in adopting through the DOI process. After the plan is created, it will be posted on the NISD website for 30 days before it can be considered in March for approval by the Board of Trustees.

During Monday’s agenda review meeting, Trujillo told board members more than 900 school districts out of 1,026 in Texas have already adopted some form of DOI.

“With flexibility comes a lot of opportunity to do things differently to impact learning,” Trujillo told trustees on Monday.

NISD is interested in exploring three areas where being a DOI would allow more options: hiring and keeping staff for difficult-to-fill positions in the high school’s career and technical department; more control over start and end times on the district’s academic calendar; and flexibility on the timeframe for when NISD seeks bids for the district depository.

Trujillo said being able to hire key positions in the CTE department, for example, is the next step after the community’s investment in the Malcolm Rector Center for Advanced Careers & Innovation.

“This community spoke loudly when they voted to build a CTE center,” he said. “Now comes the rest of the work.

“Next is finding the individuals who have the skill set and the experience and the knowledge to provide our kids with the best skills to go out and be productive citizens in Nacogdoches and to make Nacogdoches they’re home.”

With additional control over the district’s calendar, NISD would be able to schedule more professional development days during the school year for teachers. The district would also have the freedom to schedule breaks at key times of the year.

For example, adjustments to the calendar would allow for the Fall semester to wrap up in December, before Christmas break. The high school would be the chief beneficiary of that move; semester finals would be completed before students have a two-week holiday break.