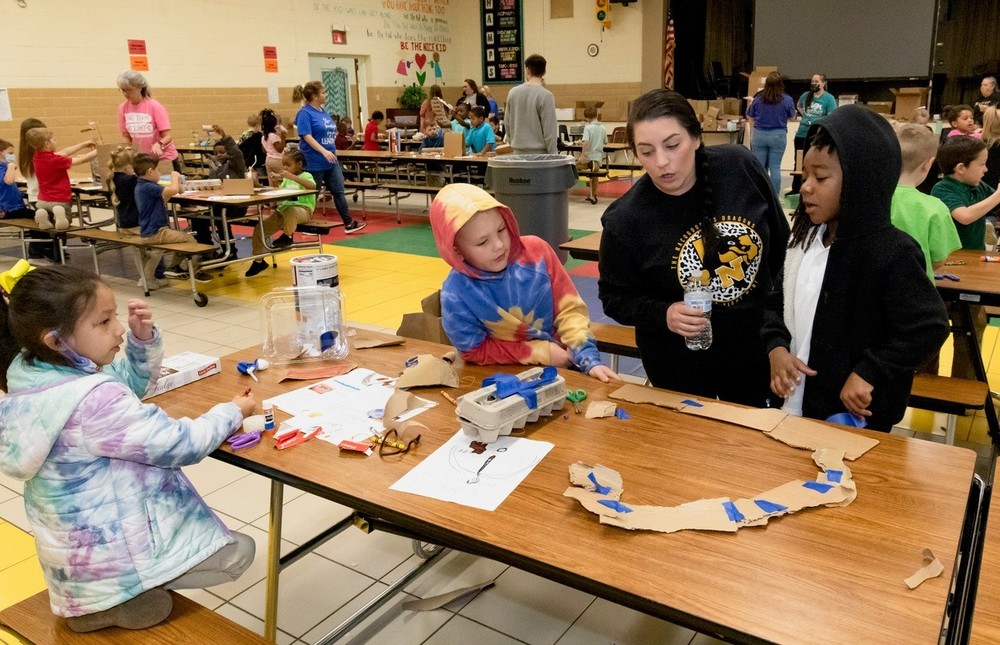 Raguet Elementary students worked Friday on the idea of creating a technical solution to a literary problem during the school’s annual Novel Engineering project.

Students in kindergarten and Grades 1-5 participate in the project that integrates literacy and STEM-related (science, technology, engineering, math) problem solving. Each grade level reads a book, then solves a problem that arises in the story.

Books read by Raguet students included: “Bear Snores On” by Karma Wilson for kindergarten, “Where the Wild Things Are” by Maurice Sendak for first grade, “Muncha! Muncha! Muncha!” by Candace Fleming for second grade, “The Three Little Javelinas” by Susan Lowell for third grade, “Twenty-one Elephants and Still Standing” by April Jones Prince, and “Pop’s Bridge” by Eve Bunting in fifth grade.

Friday morning, in the Raguet gym, teams of third-graders were coming up with solutions to help the three javelinas escape the clutches of the big, bad coyote. Most were designing sturdier housing to protect the javelinas, while others came up with plans to solve the problem of the coyote (such as finding an alternative food source).

At the same time third-graders were in the gym, teams of kindergarteners in the cafeteria designed the best ways to awaken the bear from “Bear Snores On,” a children’s tale about small animals taking refuge in a cave inhabited by… a sleeping bear.

Raguet began its Novel Engineering challenge after NIBCO, a manufacturer of valves and flow-control products with a facility in Nacogdoches, received a grant and reached out to the campus about funding a STEM-related project. NIBCO’s funding makes sure each Raguet student went home with their own copy of the book.