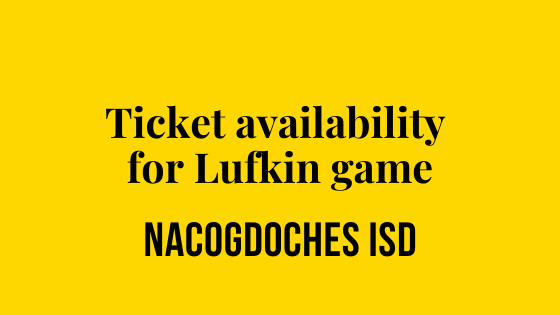 Ticket sales will be limited for Friday’s varsity football game between Lufkin and Nacogdoches High School at Dragon Stadium.

The families of uniformed performing students for Nacogdoches High School will be able to buy up to four tickets to the game. Uniformed groups include players, band, drill team, cheerleaders, and ROTC. All general admission tickets will be distributed to the performing students’ parents by their coach or sponsor. Nacogdoches season ticket holders will be able to attend Friday’s game.

No student tickets will be sold by NHS; any student attending the game will gain entry to the stadium by using a season ticket or by using one of the four tickets purchased by families of performing students. Any students that are not performing on Friday will need to be accompanied by an adult to enter the stadium.

Coaches and directors at NHS will distribute tickets to the parents of their team or performing groups. The tickets should not be shared and are to be used solely by the families.

There will be no tickets sold at the gate before the game.

Once inside Dragon Stadium, fans will not be allowed to congregate in any areas outside of the bleachers. Fans attending the game must remain in their seats unless they are visiting concession stands or the restrooms.

The Lufkin-Nacogdoches football game is the longest-running high school rivalry in Texas, and Nacogdoches ISD is taking every precaution to protect student performers and fans at the varsity football game. The district is treating this game differently than other home games scheduled for the remainder of the season.

Nacogdoches High School is excited about Friday’s game and wants everyone to have a safe and fun experience at Dragon Stadium.