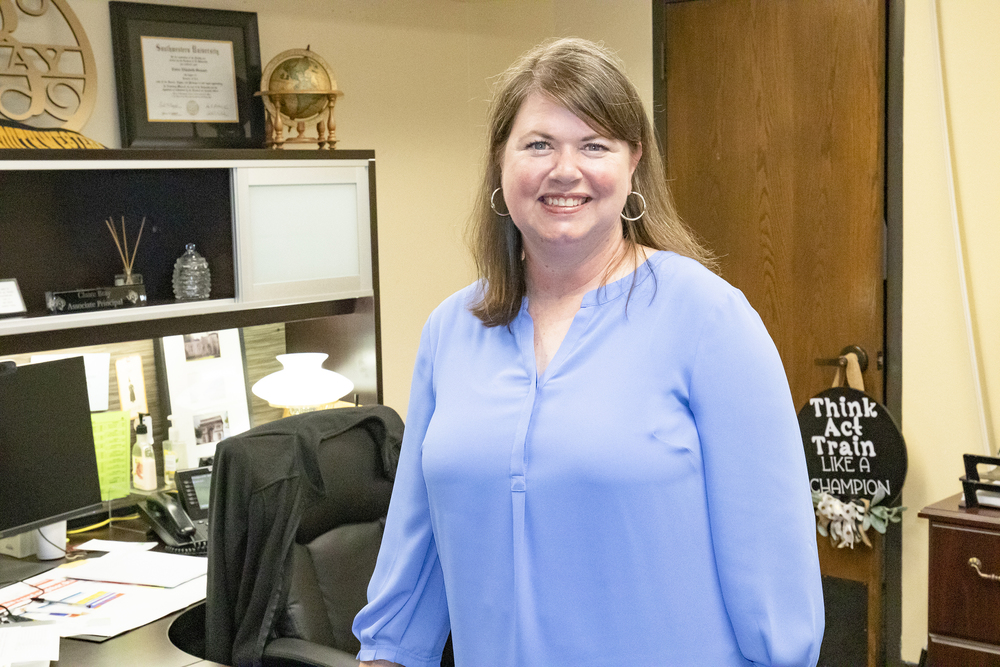 Claire Bray was named Assistant Principal of the Year for Region 7 last month, but the Nacogdoches High School administrator is quick to share credit with others.

“The reason that I struggle with an award like this is it’s not just me,” said Bray. “In the application process you have to list all of these things, all of the accomplishments of your campus. And I cannot stress enough that it’s not just me. It’s our whole team, our whole district, our teaching staff, it’s Mr. Autrey [NHS principal Stephen Autrey], it’s our whole admin team, all the teachers that are willing to try new things, and support the initiatives that we have that have made the campus successful, which is what the award is based on.”

Bray has been with NISD since 2004, starting out at Thomas J. Rusk when it was the district’s middle school. She taught the spring semester of 2004 then moved into the newly completed McMichael Middle School that fall to teach Texas History to seventh-graders.

From 2006 to 2013, Bray was a social studies teacher at NHS, where she served as department chair then district coordinator for the subject.

Bray enjoys the wide array of challenges that come with a normal school day.

“No two days look the same,” Bray said last week. “Usually, it’s a mix of interacting with students in the hallways, working with teachers, observing in their classrooms and meeting with them on their conference periods, of course, planning with Mr. Autrey, working with him on any major projects that are coming up.”

For Autrey, who just completed his first year as NHS principal after four years at Mike Moses Middle School, Bray’s willingness to take on any challenge is an invaluable resource for the campus. “Her commitment to make sure our campus is successful just really stands out to me. It’s infectious, really, and influences those around her,” said Autrey. “Also, she’s extremely talented, and when combined with her vast experience teaching and leading, Ms. Bray is an invaluable resource to Nacogdoches High School.”

After graduating from Sherman High School and Southwestern University in Georgetown, Bray taught U.S. History, first in schools in the Plano and Frisco area, then later on in Texarkana before settling in Nacogdoches.

Bray is a lifelong history lover, something she attributes to a high school teacher for helping stoke that interest.

“In middle school and high school I had a history teacher who absolutely was phenomenal,” she said. “She was one of those people who just knew so much. She made all us love history, and when I left for college I decided I was going to be a history major. And I wanted to teach so I could hopefully reach one kiddo and make them love history just as much as I do.”

Bray's role at NHS as Associate Principal for Curriculum and Instruction supports and guides all instructional efforts on campus.

For the most part, Bray’s work is with teachers, although she does serve as a source for students who have questions about their academic path.

“I am typically the go-to if students have academic questions,” Bray said. “Whereas the grade-level APs work mostly with students and teachers on the classroom management/behavior side.”